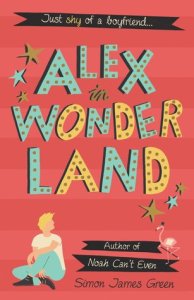 Socially awkward Alex is used to disappointment, and this summer is looking to be his sorriest yet.

When he unexpectedly lands a job at Wonderland, a run-down amusement arcade, he starts making new friends. It looks like his bad luck is about to change.

But in Wonderland nothing is quite what it seems.

And in life and love, sometimes you have to make your own luck.

Awkwardly shy sixteen-year-old Alex’s only two friends Will and Alice, who are now dating, have abandoned him for the summer.

Kendra, Alex’s dad’s girlfriend (who he views as a wicked stepmother) bullies him into finding a job for the summer. After an accident at Wonderland, a run-down waterfront amusement park, Alex secures a summer job there. Wonderland owner Maggie gives Alex a job on the condition he doesn’t sue her over his accident.

Despite giving the appearance that she hates teenagers Maggie has a soft spot for Alex.

At Wonderland Alex’s co-workers are a weird bunch of teenage misfits. He is befriended by Efia and Ben. Alex develops a crush on Ben, unfortunately he has a girlfriend Bella, who to make matters worse in lovely and definitely hard to hate.

There is also another potential suitor in the form of Caleb aka Lemon Boy, a young hunky lemonade seller, who saves Alex from drowning after he falls off the pier dressed in a pink flamingo costume – another awkward Alex moment – there are plenty.

Wonderland is in financial trouble, so Alex, Efia and Ben set out to revamp and save the amusement park.

When mysterious and threatening notes begin to appear our Scooby-Doo gang set out to investigate. I worked out who was behind the notes and other threatening incidents before the reveal, but didn’t mind as the mystery is only a sub-plot in the story.