Series: Prequel to The Hate U Give

A searing exploration of Black manhood set seventeen years before the events of The Hate U Give.

With his King Lord dad in prison and his mom working two jobs, seventeen-year-old Maverick Carter helps the only way he knows how: slinging drugs. Life’s not prefect, but he’s got everything under control. Until he finds out he’s a father…

Suddenly its not so easy to deal drugs and finish school with a baby dependent on him for everything. So when he’s offered the chance to go straight, he takes it. But when King Lord blood runs through your veins, you don’t get to just walk away.

Concrete Rose is a prequel to Thomas’ 2017 debut novel The Hate U Give, which followed sixteen-year-old Starr Carter after witnessing the fatal shooting of her unarmed best friend, Khalil, by a white police officer. The prequel set in the late 1990s tells the story of Starr’s father, Maverick as a seventeen-year-old high school senior and a junior member of King Lords gang.

Maverick’s father is in prison and he is being raised by his working-class mother Faye. After a DNA test Maverick finds that he fathered a son in a one-night stand when he was on a break from his current girlfriend Lisa. Soon after he is left with infant son when the baby’s mother Iesha disappears.

He is determined to put drug dealing behind him provide for his son Seven by working at Mr. Wyatt’s grocery store.

Both The Hate U Give and On the Come Up featured a strong young black woman as the protagonist. It was interesting to see Thomas tackle the voice of the young black male and address issues of masculinity, gang life, gun violence and teen fatherhood.

It is not necessary to have read The Hate U Give as Concrete Rose is a stand alone story. Readers of the first novel will know where Maverick’s story ends and will appreciate exploring the characters of Garden Heights further.

Click here to read my review of Thomas’ debut novel The Hate U Give.

Click here to read my review of On the Come Up

I borrowed this book from my public library. 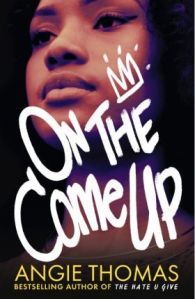 Title: On the Come Up

Sixteen-year-old Bri wants to be one of the greatest rappers of all time. It’s hard to get your come up, through, when you’re labeled “trouble” at school and your fridge at home is empty after your mom loses her job. But Bri’s success is all that stands between her family and homelessness, so she doesn’t just want to make it – she has to.
Even if it means becoming exactly what the public expects her to be.

Sixteen-year-old Brianna ‘Bri’ Jackson attends a public arts school and is an inspiring rapper. Her father Lawless, an underground rapper, was shot dead by a rival gang when she was a child. Bri is raised by her mother Jay, a recovering drug addict who has been clean for eight years. Jay is behind with the rent and struggling to put food on the table.

Bri is also supported by Aunt Pooh, a gang member and drug dealer, and her older brother Trey, the college-educated golden boy of family, who despite his education is unable to find a good job.

There are racial tensions at her school. There is an incident where two security officers throw Bri to the ground assuming she is a drug dealer. Bri puts her frustration and anger about the injustice black students face into a rap song, which goes viral.

Bri wins a rap battle at a local hip-hop venue. Will this be her breakout moment and her chance to score her a recording contract?

On the Come Up, is set in Garden Heights, the same predominantly black and poor neigbourhood as Thomas’ debut novel The Hate U Give. It is not a sequel, but takes places following the events of The Hate U Give.

Thomas herself was rapper as teenage and when I read Bri’s raps I could her voice clearly. I usually dislike when authors write lyrics into novels, but Thomas nails it.

On the Come Up is a compelling coming-of-age story about young black woman finding her voice.

Click here to read my review of Thomas’ debut novel The Hate U Give.

I borrowed this book from my public library.