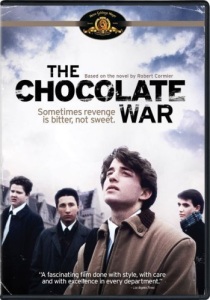 This month’s book club pick is Robert Cormier’s 1974 novel The Chocolate War. A film adaptation written and directed by Keith Gordon was released in 1988.

The two students are Archie (Wallace Langham) and Obie (Doug Hutchison). Both are members of The Vigils, a secret underground student society.

Each student when joining the Vigils is assigned a task. Albie gives Jerry’s the assignment to refuse to sell any chocolates for ten days during the school’s fundraiser.

Jerry decides after the ten days to still refuse to sell chocolates, which puts him at heads with the Vigils and sadistic vice principal Brother Leon (John Glover). His defiant act turns into an all-out war with bullying and coercion.

First time director Keith Gordon was a teen actor himself (he made his film debut at 17 in Jaws 2) so he has a good understanding of a young actor’s process. He was also only 27 when he directed The Chocolate War. Other than are few issues, such as editing choices and the use of some fantasy sequences that don’t always work, it is a competent effort for a first time director and he largely delivers good performances from his cast.