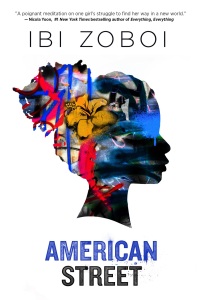 On the corner of American Street and Joy Road, Fabiola Toussaint thought she would finally find une belle vie – a good life.

But after they leave Port-au-Prince, Haiti, Fabiola’s mother is detained by U.S. immigration, leaving Fabiola to navigate her loud American cousins, Chantal, Donna, and Princess; the grittiness of Detroit’s west side; a new school; and a surprising romance, all on her own.

Just as she finds her footing in this strange new world, a dangerous proposition presents itself, and Fabiola soon realizes that freedom comes at a cost. Trapped at the crossroads of an impossible choice, will she pay the price for the American dream.

In her stunning debut, Pushcart-nominated author Ibi Zoboi draws on her own experiences as a young Haitian immigrant, infusing this lyrical exploration of America with magical realism and Vodou culture. Unflinching yet filled with joy, American Street is an evocative and powerful coming-of-age story.

The novel, which is narrated by sixteen-year-old Fabiola Toussaint opens with her arriving in New York with her mother. They are immigrating to the United States Fabiola’s birthplace from Port-au-Prince, Haiti.

Fabiola’s mother is detained by immigration at the airport and Fabiola has to travel onto Detroit by herself. There she meets her Aunt Jo and her three cousins Chantal (Chant), Primadonna (Donna) and Princess (Pri).

Later Fabiola learns that they plan to deport her mother back to Haiti. She meets Detective Shawna Stevens from the Grosse Pointe Park Police Department who offers to help release her mother into the States if she helps with a police investigation.

American Street follows Fabiola’s journey in Detroit as she adjusts to life in America with a new school, new friends, and a new romance.

Although the novel is set in present day it is based on Zoboi’s own experiences as a Haitian immigrant in Bushwich, Brooklyn in the 1980s.