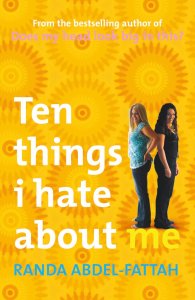 Title: Ten things I hate about me

There are a lot of things Jamie hates about her life: her dark hair, her dad’s Stone Age Charter of Curfew Rights, her real name – Jamilah Towfeek.

For the past three years Jamie has hidden her Lebanese background from everyone at school. It’s only with her email friend John that she can really be herself. But now life is getting more complicated. The most popular boy in school is interested in her, but there’s no way he would be if he knew the truth. Then there’s Timothy, the school loner, who for some reason Jamie just can’t stop thinking about. As for John, he seems to have a pretty big secret of his own…

To top it all off, Jamie’s school formal is coming up. The only way she’ll be allowed to attend is by revealing her true identity. But who is she…Jamie or Jamilah?

The novel follows sixteen-year-old Australian-Lebanese-Muslim high school student Jamilah Towfeek living in the western suburbs of Sydney. Jamiliah for the past three years has hidden her Lebanese-Muslim identity from her high school peers by dying her hair blonde, wearing blue contact lenses, and going by the name Jamie.

Unfortunately at her school bullying and ethnic discrimination exists. So it is understandable why Jamilah is hiding her identity.

At home Jamilah feels oppressed by her overly protective father’s strict rules. He is the breadwinner and disciplinarian after her mother’s passing. Jamilah is frustrated by her older brother Bilal’s freedom, he doesn’t have the same rules and can go out to parties and date because he is a boy. She is also embarrassed by sister Shereen’s Muslim activism.

Jamilah hasn’t completely denied her Lebanese-Muslim heritage she enjoys attending madrasa, an Arabic school, where she plays the drums in a band.

There are also three boys in Jamilah’s life.

At school Jamie attracts the attention of Peter, one of the most popular boys in school, but also one of the school bullies.

Jamie is also partnered on class assignment with Timothy, a loner in school who is comfortable in his own skin and isn’t bothered by what his classmates think of him.

Then there is John, a boy who she communicates with via email (her email is Ten_Things_I_hate_About_Me@hotmail.com). John is the only person she can be herself with because they have never met.

As one will expect the novel explores Jamilah’s struggles to accept her true identity.

In 2017 I attended All Day YA at the Sydney Writer’s Festival, where Randa Abdel-Fattah was on a panel about diversity in YA Fiction.